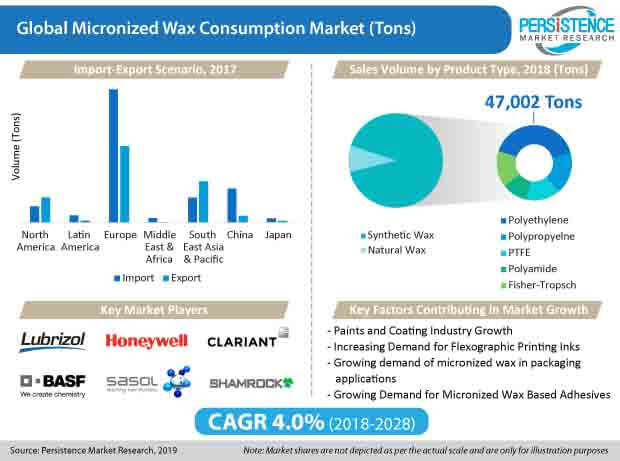 Persistence Market Research delivers key insights on the global micronized wax market, in its latest report titled, ‘Micronized wax Market: Global Industry Analysis 2013–2017 and Forecast 2018–2028′. The global demand for micronized wax is expected to remain strong, with a CAGR of 4.0% over 2018-2028.

According to the National Candle Association (NCA), the United States represents a massive demand for candles, including candle accessories by U.S households. Growing population and consumers’ class in emerging as well as developing economies will support the demand of waxes/hydrocarbons.

Further, the main increase in consumption will come from the transportation sectors in developing countries. This increased demand for hydrocarbons is led by changing lifestyles, globalization, and industrialization, worldwide. As a result, the global micronized wax market is estimated to experience significant growth over the forecast period.

Furthermore, the growing transportation and trade of packaged foods will create significant growth opportunities for the packaging industry during the forecast period. Hard paraffin and micronized wax mixtures with plastics and resins are used for coatings, contact adhesives, and impregnations used in packaging to ensure the extensive life of fruits/foods.

Micronized wax protects fruits and food grains from moisture, thereby keeping them fresh and safe for a longer duration. Thus, the demand for micronized wax is expected to increase due to the growing demand from the food packaging industry in the coming years.

Natural wax includes carnauba wax, and other types of waxes such as beeswax and micronized sugarcane wax. Leading players in the market provide almost all the products for micronized wax to various end users. Synthetic wax is projected to be one of the most lucrative segments throughout the forecast period.

On the basis of application, the micronized wax market is segmented into adhesives, paints and coatings, printing inks, plastics, building material, packaging, and tires & rubbers. The market for paints & coatings is growing at a steady pace, in light of the increasing demand from the building & construction and automotive sectors, primarily.

Protective coatings are playing a key role in the finishing processes of a large number of consumer and industrial products, imparting surface protection against scratches, impact resistance, corrosion protection, and improved appearance characteristics. The adhesives segment is anticipated to be a major factor driving the demand for micronized wax over the forecast period.

There has been a decent rise in the use of micronized wax-based adhesives, owing to their excellent stability, strength, and resistance. Such factors are expected to significantly boost the growth of the global micronized wax market during the forecast period.

The market in China is anticipated to expand at a relatively higher growth rate, owing to the increasing demand for paints and coatings, and adhesives, for the development of new infrastructure and buildings, and from the automotive industry, among others, which, in turn, is projected to drive the demand for micronized wax. The micronized wax market in China is expected to be the most lucrative market, and is projected to grow at a CAGR of 4.9% during the forecast period.